Proceedings of the IEEE International Conference on Robotics and Automation (ICRA), 2015 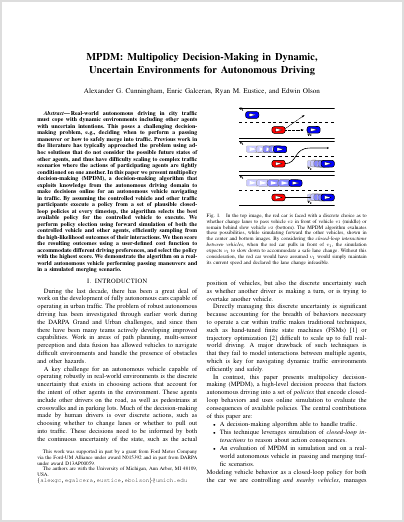 Real-world autonomous driving in city traffic must cope with dynamic environments including other agents with uncertain intentions. This poses a challenging decision-making problem, e.g., deciding when to perform a passing maneuver or how to safely merge into traffic. Previous work in the literature has typically approached the problem using ad-hoc solutions that do not consider the possible future states of other agents, and thus have difficulty scaling to complex traffic scenarios where the actions of participating agents are tightly conditioned on one another. In this paper we present multipolicy decision-making (MPDM), a decision-making algorithm that exploits knowledge from the autonomous driving domain to make decisions online for an autonomous vehicle navigating in traffic. By assuming the controlled vehicle and other traffic participants execute a policy from a set of plausible closed-loop policies at every timestep, the algorithm selects the best available policy for the controlled vehicle to execute. We perform policy election using forward simulation of both the controlled vehicle and other agents, efficiently sampling from the high-likelihood outcomes of their interactions. We then score the resulting outcomes using a user-defined cost function to accommodate different driving preferences, and select the policy with the highest score. We demonstrate the algorithm on a real-world autonomous vehicle performing passing maneuvers and in a simulated merging scenario.