Augmented vehicle tracking under occlusions for decision-making in autonomous driving

Proceedings of the IEEE International Conference on Robotics and Automation (ICRA), 2015 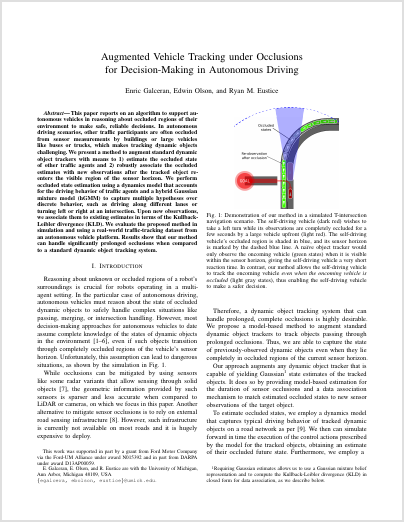 This paper reports on an algorithm to support autonomous vehicles in reasoning about occluded regions of their environment to make safe, reliable decisions. In autonomous driving scenarios, other traffic participants are often occluded from sensor measurements by buildings or large vehicles like buses or trucks, which makes tracking dynamic objects challenging. We present a method to augment standard dynamic object trackers with means to 1) estimate the occluded state of other traffic agents and 2) robustly associate the occluded estimates with new observations after the tracked object reenters the visible region of the sensor horizon. We perform occluded state estimation using a dynamics model that accounts for the driving behavior of traffic agents and a hybrid Gaussian mixture model (hGMM) to capture multiple hypotheses over discrete behavior, such as driving along different lanes or turning left or right at an intersection. Upon new observations, we associate them to existing estimates in terms of the KullbackLeibler divergence (KLD). We evaluate the proposed method in simulation and using a real-world traffic-tracking dataset from an autonomous vehicle platform. Results show that our method can handle significantly prolonged occlusions when compared to a standard dynamic object tracking system.