FILTERING AND TRACKING FOR A PEDESTRIAN DEAD-RECKONING SYSTEM 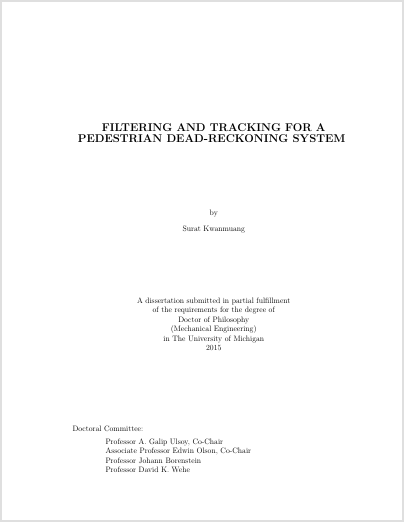 This thesis proposes a leader-follower system in which a robot, equipped with relatively sophisticated sensors, tracks and follows a human whose equipped with a low-fidelity odometry sensor called a Pedestrian Dead-Reckoning (PDR) device. Such a system is useful for “pack mule” applications, where the robot carries heavy loads for the humans. The proposed system is not dependent upon GPS, which can be jammed or obstructed. This human-following capability is made possible due to several novel contributions. First, we perform an in-depth analysis of our Pedestrian Dead-Reckoning (PDR) system with the Unscented Kalman Filter (UKF) and models of varying complexity. We propose an extension that limits elevation errors, and show that our proposed method reduces errors by 63% compared to a baseline method. We also propose a method for integrating magnetometers into the PDR framework, which automatically and opportunistically calibrates for hard/soft-iron effects and sensor misalignments. In a series of large-scale experiments, we show that this system achieves positional errors of less than 1.9% of the distance traveled. Finally, we propose methods that allow a robot to use LIDAR data to improve the accuracy of the robot’s estimate of the humans trajectory. These methods include: 1) a particle filter method and 2) two multi-hypothesis maximum-likelihood approaches based on stochastic gradient descent optimization. We show that the proposed approaches are able to track human trajectories in several synthetic and real-world datasets.