HoverBots: Precise Locomotion Using Robots That Are Designed for Manufacturability

Frontiers in Robotics and AI, 2017 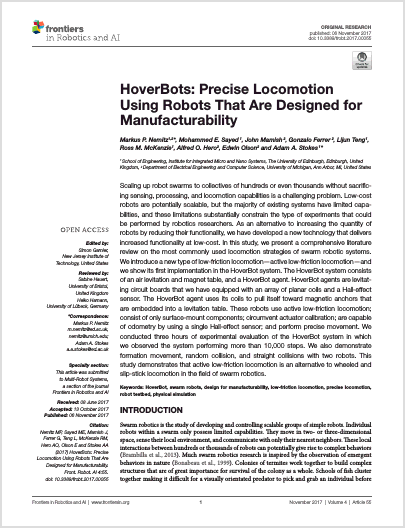 Scaling up robot swarms to collectives of hundreds or even thousands without sacrificing sensing, processing, and locomotion capabilities is a challenging problem. Low-cost robots are potentially scalable but the majority of existing systems have limited capabilities, and these limitations substantially constrain the type of experiments that could be performed by robotics researchers. As an alternative to increasing the quantity of robots by reducing their functionality, we have developed a new technology that delivers increased functionality at low-cost. In this paper we present a comprehensive literature review on the most commonly used locomotion strategies of swarm robotic systems. We introduce a new type of low-friction locomotion—active low-friction locomotion—and we show its first implementation in the HoverBot system. The HoverBot system consists of an air-levitation and magnet table, and a HoverBot agent. HoverBot agents are levitating circuit boards which we have equipped with an array of planar coils and a Hall-effect sensor. The HoverBot agent uses its coils to pull itself towards magnetic anchors that are embedded into a levitation table. These robots: use active low-friction locomotion; consist of only surface-mount components; circumvent actuator calibration; are capable of odometry by using a single Hall-effect sensor; and perform precise movement. We conducted three-hours of experimental evaluation of the HoverBot system in which we observed the system performing more than ten-thousand steps. We also demonstrate formation movement, random collision, and straight collisions with two robots. This study demonstrates that active low-friction locomotion is an alternative to wheeled and slip-stick locomotion in the field of swarm robotics.