Communications of the ACM, 2013 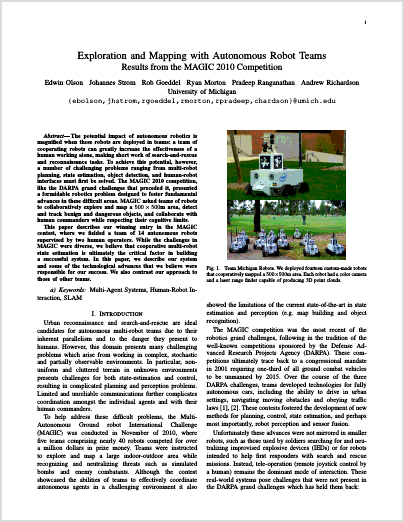 The potential impact of autonomous robotics is magnified when those robots are deployed in teams: a team of cooperating robots can greatly increase the effectiveness of a human working alone, making short work of search-and-rescue and reconnaissance tasks. To achieve this potential, however, a number of challenging problems ranging from multi-robot planning, state estimation, object detection, and human-robot interfaces must first be solved. The MAGIC 2010 competition, like the DARPA grand challenges that preceded it, presented a formidable robotics problem designed to foster fundamental advances in these difficult areas. MAGIC asked teams of robots to collaboratively explore and map a 500 × 500m area, detect and track benign and dangerous objects, and collaborate with human commanders while respecting their cognitive limits.

This paper describes our winning entry in the MAGIC contest, where we fielded a team of 14 autonomous robots supervised by two human operators. While the challenges in MAGIC were diverse, we believe that cooperative multi-robot state estimation is ultimately the critical factor in building a successful system. In this paper, we describe our system and some of the technological advances that we believe were responsible for our success. We also contrast our approach to those of other teams