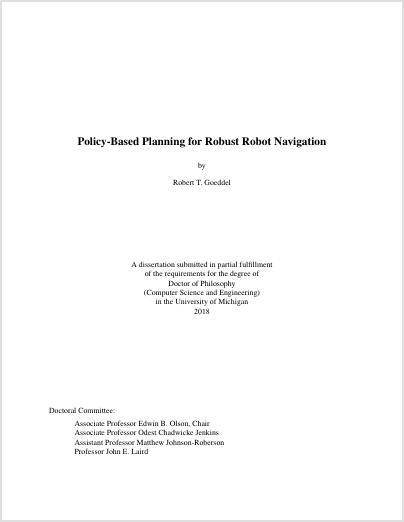 This thesis proposes techniques for constructing and implementing an extensible navigation framework suitable for operating alongside or in place of traditional navigation systems. Robot navigation is only possible when many subsystems work in tandem such as localization and mapping, motion planning, control, and object tracking. Errors in any one of these subsystems can result in the robot failing to accomplish its task, oftentimes requiring human interventions that diminish the benefits theoretically provided by autonomous robotic systems.

Our first contribution is Direction Approximation through Random Trials (DART), a method for generating human-followable navigation instructions optimized for followability instead of traditional metrics such as path length. We show how this strategy can be extended to robot navigation planning, allowing the robot to compute the sequence of control policies and switching conditions maximizing the likelihood with which the robot will reach its goal. This technique allows robots to select plans based on reliability in addition to efficiency, avoiding error-prone actions or areas of the environment. We also show how DART can be used to build compact, topological maps of its environments, offering opportunities to scale to larger environments.

DART depends on the existence of a set of behaviors and switching conditions describing ways the robot can move through an environment. In the remainder of this thesis, we present methods for learning these behaviors and conditions in indoor environments. To support landmarkbased navigation, we show how to train a Convolutional Neural Network (CNN) to distinguish between semantically labeled 2D occupancy grids generated from LIDAR data. By providing the robot the ability to recognize specific classes of places based on human labels, not only do we support transitioning between control laws, but also provide hooks for human-aided instruction and direction.

Additionally, we suggest a subset of behaviors that provide DART with a sufficient set of actions to navigate in most indoor environments and introduce a method to learn these behaviors from teleloperated demonstrations. Our method learns a cost function suitable for integration into gradient-based control schemes. This enables the robot to execute behaviors in the absence of global knowledge. We present results demonstrating these behaviors working in several environments with varied structure, indicating that they generalize well to new environments.

This work was motivated by the weaknesses and brittleness of many state-of-the-art navigation systems. Reliable navigation is the foundation of any mobile robotic system. It provides access to larger work spaces and enables a wide variety of tasks. Even though navigation systems have continued to improve, catastrophic failures can still occur (e.g. due to an incorrect loop closure) that limit their reliability. Furthermore, as work areas approach the scale of kilometers, constructing and operating on precise localization maps becomes expensive. These limitations prevent large scale deployments of robots outside of controlled settings and laboratory environments.

The work presented in this thesis is intended to augment or replace traditional navigation systems to mitigate concerns about scalability and reliability by considering the effects of navigation failures for particular actions. By considering these effects when evaluating the actions to take, our framework can adapt navigation strategies to best take advantage of the capabilities of the robot in a given environment. A natural output of our framework is a topological network of actions and switching conditions, providing compact representations of work areas suitable for fast, scalable planning.