Proceedings of the IEEE/RSJ International Conference on Intelligent Robots and Systems (IROS), 2015 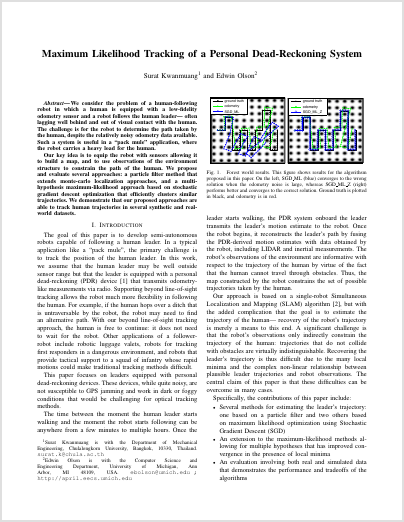 We consider the problem of a human-following robot in which a human is equipped with a low-fidelity odometry sensor and a robot follows the human leader— often lagging well behind and out of visual contact with the human. The challenge is for the robot to determine the path taken by the human, despite the relatively noisy odometry data available. Such a system is useful in a “pack mule” application, where the robot carries a heavy load for the human. Our key idea is to equip the robot with sensors allowing it to build a map, and to use observations of the environment structure to constrain the path of the human. We propose and evaluate several approaches: a particle filter method that extends monte-carlo localization approaches, and a multi- hypothesis maximum-likelihood approach based on stochastic gradient descent optimization that efficiently clusters similar trajectories. We demonstrate that our proposed approaches are able to track human trajectories in several synthetic and real-world datasets.