Proceedings of the IEEE International Conference on Robotics and Automation (ICRA), 2014 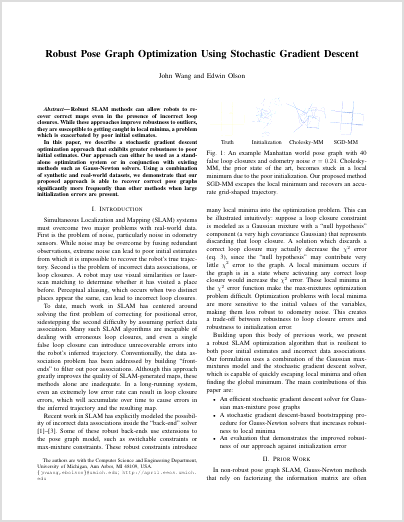 Robust SLAM methods can allow robots to recover correct maps even in the presence of incorrect loop closures. While these approaches improve robustness to outliers, they are susceptible to getting caught in local minima, a problem which is exacerbated by poor initial estimates. In this paper, we describe a stochastic gradient descent optimization approach that exhibits greater robustness to poor initial estimates. Our approach can either be used as a stand-alone optimization system or in conjunction with existing methods such as Gauss-Newton solvers. Using a combination of synthetic and real-world datasets, we demonstrate that our proposed approach is able to recover correct pose graphs signiﬁcantly more frequently than other methods when large initialization errors are present.